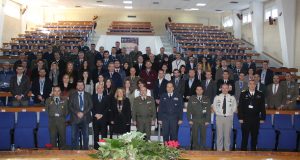 From Monday 10 February 2020 until Friday 14 February 2020, the Common Security and Defense Policy Orientation Course within the framework of the EU’s Common Foreign and Security Policy was held in the Hellenic Supreme Joint War College (HSJWC).

The School was held at HSJWC’s premises, in collaboration with the University of Macedonia (UoM) and under the auspices of the European Security and Defense College. The school was conducted in English. During the School, lecturew were made by diplomats, military, university professors, representatives of international organizations and bodies of the EU. The Director of the Chair, Mrs. Bellou Fotini, gave the opening speech of the School on February 10, as she also participated in the Round Table Discussion held in the Officers’ Club of Thessaloniki on the same day. On February 13, she gave a lecture at the School on “Gender Awareness: The Women, Peace and Security Agenda”. 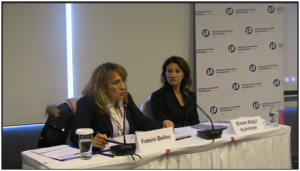 The Center for International and European Studies held the 5th Greek-Turkish Young Leaders’ Security Symposium in Kavala between 4-7 December 2019 in collaboration with the Navarino Network and the Friedrich Naumann Foundation for Freedom. The Director of the Chair, Mrs. Bellou Fotini, spoke at the symposium about Greek-Turkish relations and the Women, Peace, and Security agenda. 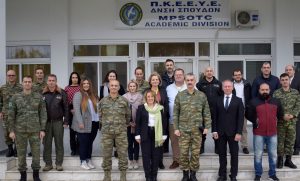 Between 02-06 December 2019, a School of Cultural Competence

was held at the Multinational Peace Support Operations Training Center, in Kristoni, Kilkis. The purpose of the School was to provide participants with an awareness of cultural values and perceptions, as well as knowledge of religious issues and gender issues. The School of Cultural Competence was held under the auspices of the European Security and Defence College (ESDC) 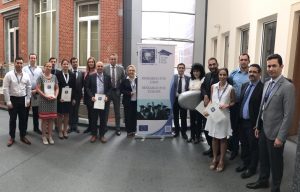 The first Summer University of the ESDC was held on July 8-12, 2019 at the Royal Military Academy in Belgium, Brussels. he participation configuration allowed for in-depth scientific discussions on topical CSDP issues and challenges and for exchanges of experience and best practices in research methodologies. The CSDP Ph.D. Fellows, who expressed a high level of satisfaction with the event and the initiative, are preparing a collective publication based on the output of these scientific exchanges, under the supervision of the Course Directors, Assistant Professor Fotini Bellou and Mr. Symeon Zambas, and the EU Institute for Security Studies.

The Director has participated in the orientation course on the European Union’s Common Defense and Security Policy at the European Security and Defense College. The Course was held at the Hellenic Supreme Joint War College in Thessaloniki from 25 February to 1 March 2019. Diplomats, representatives of international organizations, military personnel, police, academics, and students were among the participants of the Scool. The main objective of the conference was to start a conersation on issues related to achieving improved capabilities and operational efficiency in the field of European security. One of the main pillars was gender. 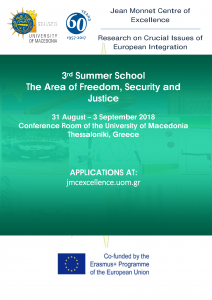 The Jean Monnet Center of Excellence of the University of Macedonia organized the 3rd International Summer School entitled “The area of freedom, security, and justice of the European Union” between August 31 – September 4, 2018, in the Conference Hall of the University of Macedonia in Thessaloniki. Bellou Fotini, the Director of the UNESCO Chair “Women, Peace, and Security”, delivered her speech entitled “New security challenges in European Security”.

07-10 May 2018 • NATO Law Conference, SHAPE / NRDC-GR, under the auspices of the National Defense General Staff 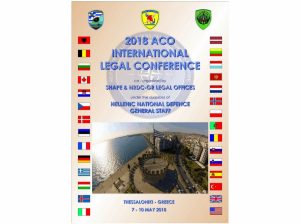 The 2018 NATO Law Conference, co-organized by the Allied Command of the Supreme Headquarters Allied Powers Europe (SHAPE) and the NATO Rapid Deployable Corps-Greece (NRDC / GR), under the auspices of the National Defense General Staff, between May 7-10, 2018, at the Officers’ Club of Thessaloniki. Bellou Fotini, the Director of the UNESCO Chair “Women, Peace, and Security”, delivered her speech entitled “Engaging a gender perspective in building resilient societies” in a panel on “Women, Peace, and Security: Working on resilience within society”. 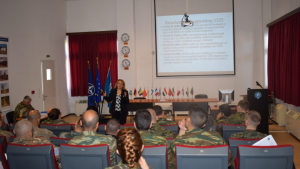 The Multinational Peace Support Operations Training Center conducted the UN Military Observatory School in May 2018 at PAPATHEOFILOU Camp in Kristoni, Kilkis, with a duration of 3 weeks, with the participation of 33 Greeks and foreigners officers, members of military and security forces and individuals from 8 countries (Armenia, Greece, UAE, France, China, Cyprus, Poland, and Zambia). Bellou Fotini, the Director of the UNESCO Chair “Women, Peace, and Security”, held a seminar on Gender issues.

Τhe 9th Annual Conference of NATO’s Naval Deterrence Training Center entitled “Fostering Projection of Stability Through Maritime Security: Achieving Enhanced Capabilities and Operational Effectiveness” was held between June 5-7, 2018 in the Gulf of Souda, Crete. The conference was attended by 125 representatives from 23 countries and international organizations, as well as representatives of the academic and business community, and it aimed to provide opportunities to discuss issues related to achieving improved maritime security capabilities and efficiency.

This site uses cookies. By continuing to browse the site you are agreeing to our use of cookies.ok